mini-review: how to encounter

February 12, 2020
I've been delaying writing this post for a while now, and this thing noisms wrote about shared hallucination/imagination convinced me now is the time.

I backed the Silent Titans kickstarter and have not run it yet. I haven't even read it through thoroughly enough to parse out what I think of it overall, or how I might try to adapt it (or not) to run at my home table. (...definitely looked at all the gorgeous pictures, which if I'm honest were about 75% of why I backed it in the first place...)

I have read through approximately the first third of the book, and found gold even in that shallow panning: the section on Making an Encounter.

Reams have been written about designing dungeons, designing monsters, judging the "appropriate challenge level" for encounters, the importance of random encounters, the value of reaction rolls, the key role morale plays in d&d, and, of course, the often-flubbed "what is roleplaying" blurb. However -and this boggles my mind now that I have an example to hold up- I have no memory of reading through a comprehensive treatment on how to run an encounter. (Comment if you know of other examples!) Not only has Patrick done this, he has done it very well.


He starts with a bit about the need for a dynamic tension between elements of play he terms Threat (which engages players in the situation, because danger) and Game (which they can fiddle and mess around with), complete with a handy graphic which sets out some contrasting examples of each end of the spectrum. Then he makes the (important) qualification that the advice given is meant primarily for theater-of-the-mind play (hence why noisms' post prompted me), rather than mini-heavy play or suchlike. He goes on:
"Gross Positioning is my term to describe how
people imagine space and moving within it,
rather than the way we actually perceive space when up and moving around.

Space described and imagined through voice and words is very
different from Space described with maps, models, or other schema.
People remember where they are, and where everything else is, by using a series of
Positional 'Locks' relating them to the things in the imagined space that they think are important.

The question is not simply describing a space to one person
over however much time you need but describing it for the minds of multiple people,
who are all interpreting it differently and all trying to  manipulate and re-interpret it within the context of the game."

There is a bit then about the importance of constant re-statement (for each and every player) of the imagined space -from the relative perspective of their character- when asking for actions or responses. This is something I'd picked up, bit-by-bit, through trial and error and example, over the years - yet to have it plainly written is incredibly valuable. I for one could have been running better games years ago had I access to such a blurb.

Then he goes on to list a few really useful Positional Lock metaphors (do you already know about this book? ...highly relevant) to use for better anchoring players in shared imagination: inside/outside, hidden/exposed, this side/that side, closer/further, & above/below. Wow. Again, I'd gotten there, yet there's a lot of "failing" I could have avoided if this had been printed years ago.

Following that are two whole pages (the entire section is four pages overall) dedicated to ideas for making environments and npcs more dynamic and interesting (and therefor memorable). All of it is good reminders if you already knew, and invaluable advice if you didn't.

And then he rounds it out with a section about the importance of using information for all of our senses when describing environments, as well as the usefulness of including descriptions of "themed" or "poetic" (some -not I- would argue "extraneous") elements.

...and that's it: four pages of concise, well-considered, clearly-articulated advice on HOW to run an encounter.

Thanks Patrick!
mini-reviews probably too many hyperlinks table top theater of the mind unsolicited opinions 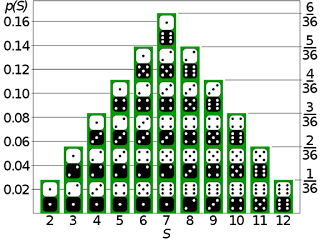 the post where the internet corrected me and I learned something

edit: I wrote this, it shall remain as written--but check out the comments because it's a good example of strangers on the internet being informative and helpful! Special thanks to The Happy Anarchist, Olav M., and Robert C.: you three rock! Ray, I'm sorry I doubted you. I wrote a post a while back about this . Unknown in the comments didn't seem to get how bell curves work, or didn't think they applied, and I tried to remedy that.....and then, after a few exchanges, I thought "wait, am I trying to convince someone on the internet??" and (with as much good humor as I could muster) I decided to let Unknown's ignorance continue unopposed. But then I stumbled through to this other post , where the author (why, Ray, why!?) seems to be asserting the same thing as Anon: that d66 is a flat, curve-less probability like any single-die roll. And now I'm thinking "am I the ignorant one?!?".... so, here's me presenting my thinking. (Although my

So if you're using d66 tables what you are rolling is 2d6, which creates a bell curve probability spread. Settlers of Catan was what got me thinking of it: the game has little number tiles which are spread around to determine which areas produce resources on a given turn. 2 and 12 show up infrequently, though 6-8 are quite common, and everything else spreads out between those extremes. This is a result of adding the two dice results together, and how frequently or infrequently certain sums are arrived at by that addition. If you're rolling 2d6 for PbtA games only the sum (the bell curve average) matters, but if you're rolling d66 the individual die results are also relevant. Observe these lists of Troika! backgrounds divided first by sum, then subdivided by die order: 2 11 Giant of Corda 3 12-21  Befouler of Ponds, Demon Stalker 4 13-22-31  Burgler, Dwarf, Gremlin Catcher 5 14-23-32-41  Cacogen, Epopt, Guild of Sharp Corners, Necromancer 6 15-2